Click on the button below to let us know what you are looking for. We will share a close match

kind of land you are looking for 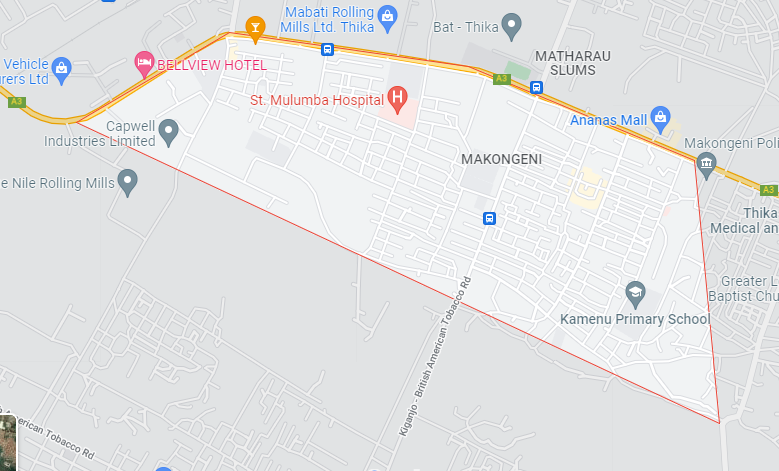 There are many ways you could search for potential land to
buy. Here is why you should start with us.

Only agents who have been tested and trusted are allowed to list a property on our platform. We review the list regularly

Save money with variety

We offer many offers in various parts of the country to help you save money. That way you can pick what fits you

You can check out offers at your own convenience. Our platform is available for you at all times

What you need to know about buying land in Makongeni, Thika

Makongeni is a suburb of Thika town in Kiambu County. It is located 13 minutes from Thika town and 48 kilometers from Nairobi CBD via the Garissa Highway.

How much should you pay for a plot in Makongeni?

Have the following price guidelines in mind whenever you intend to purchase Makongeni plots. Prices are dependent mostly on the nearness to tarmacked roads and the town center.

4. Half an acre starts from the minimum of 1.5 million.

What are your investment options in Makongeni?

In Makongeni, you can decide to build rentals. It can either be:

You can also speculate. Its proximity to Garissa road and the industrial town of Thika means that land will always appreciate.

Lastly, you can put up your own house. Makongeni has an enviable location near a highway and different social amenities.

Should you be worried by the process of purchasing Makongeni plots?

Buying plots in Makongeni requires due diligence to ensure the legitimacy of the title deed.

1. Track down a vendor either online or physically and arrange for a site visit.

2. Check whether the plot has marked beacons, the distance to social amenities, the terrain, and so in.

3. Visit the Thika land office and conduct an official search. It will show you:

•location of the plot

4. Visit Kiambu County offices and check for any land rates. If any unpaid rates exist, the vendor should either pay them, or you should deduct that some from the sum they have quoted.

5. Scout for a reputable lawyer. Ask him or her to draft a legal document that will bind both you and the vendor to the process of buying and selling the plot.

6. At this juncture, deposit less than ten percent of the actual price with your lawyer.

7. Before paying up the rest, ensure you have the Land Control Board’s consent to purchase the plot. If the vendor did not get the consent to sell the plot, back out of the agreement because LCB won’t give you the consent to buy the plot.

8. If everything is in order, deposit the other amount and immediately start the transfer process. You can also fence the plot to protect it from grabbers.

Which realtors can you choose when purchasing Makongeni plots?

How big are Makongeni plots?

Has land been zoned in Makongeni?

Title deeds in Makongeni are mostly freehold, something that allows you to do so as you please with the plot.

Community land also exists and is mostly owned by real estate companies. Be sure to conduct due diligence before buying.

Public land, on the other hand, belongs to different government institutions like schools, health centers, and also police stations.

Why is Makongeni a perfect real estate market?

There are concrete reasons why you should invest your hard-earned cash in Makongeni plots.

1. Location. Being next to a major highway means that it’s easily accessible. Makongeni is less than 15 minutes from Thika and less than an hour’s drive from Nairobi. Its strategic location makes it the number one choice to invest in for commercial and speculative purposes.

3. Health facilities. Medical institutions are within reach in Makongeni. There are also private hospitals with a national face in Thika, 13 minutes away. In Makongeni, you can be served at:

4. Return on investment. Its proximity to Thika town with both private and public institutions, and different institutions of higher learning means that it’s an estate of choice for those seeking to rent houses. Thus, building rental apartments, bungalows, bedsitters, and single rooms guarantees you returns.

5. Accessible roads. Because it’s within Thika municipality, the roads are accessible which eases movement. Examples of roads are Serengeti Road, Masai Road, and the Kiganjo-British American Road.

6. Financial institutions. KCB Bank, Equity, and family are just a few examples of branches in Makongeni.

Is the land search process necessary in Makongeni?

The land search is part of exercising due diligence when purchasing real estate.

Pay a visit to the Thika land office with your identification documents and the title deed copy. Fill out the official ‘Application for land search’ document, pay Kes 500 fee, and wait.

Due to its location, the offices are busy. You may have to wait for a whole day. The maximum number of days is three.